Corsets are a fashion relic. Previously used to consolidate organs, they were popularized in modern times as a staple lingerie item, a sexy top paired with bad decisions, and now a casual item. We’ve seen a surge in layering tees under corsets, sweaters, and even a little peak-a-boo action under a blouse.

The evolution is apparent, and next on the agenda is this: 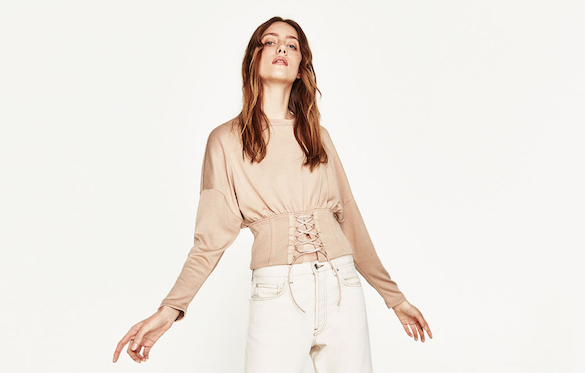 Enter Zara. This ahead-of-the-curve fashion retailer just released a corset-dolman hybrid that combines soft materials, a slim laced-up waist, and an easy breezy top. An approachable take on the timeless trend invites less daring consumers and possibly a new silhouette entirely for casual attire. The ability to adjust tightness is pretty rad too, because morning bod bears no resemblance to post-lunch bod.

According to NYFW, the corset effect can also work its way from the bottom up. High waisted pants have been trending for some time now, and right when we thought they were destined to plummet, they shot right up to the waist. Designers like Rosie Assoulin and The Row introduced waist-defining trousers that redefine the corset as something to step into.